New Chief Judge for U.S. District Court for the Eastern District of PA

FOR THE EASTERN DISTRICT OF PENNSYLVANIA 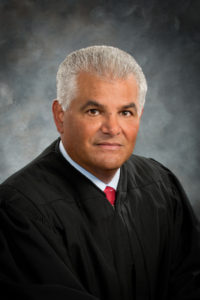 OF THE EASTERN DISTRICT

PHILADELPHIA, PA – The Honorable Juan R. Sánchez became Chief Judge of the United States District Court in the Eastern District of Pennsylvania on August 1, 2018. Judge Sánchez has served as a federal judge for over fourteen years and follows the Honorable Lawrence F. Stengel as the 15th Chief Judge of this district. He is the first Hispanic to lead the Court in its 229-year history. One of thirteen original federal judicial districts created by the federal Judiciary Act of 1789, the Eastern District encompasses Philadelphia, Berks, Bucks, Chester, Delaware, Lancaster, Lehigh, Montgomery, and Northampton counties.

Judge Juan Sánchez is a thoroughly good man who has served with distinction as a judge on this Court for over 14 years. He is hard working, reliable, honest, and true. Judge Sánchez built a reputation for dedication to justice and excellence in his work while on the Chester County Court of Common Pleas and that has continued. He has earned the respect and admiration of lawyers and judges here in the federal court. Judge Sánchez is already viewed as a leader among our colleagues. The work he has done with various projects as Chair of our Jury Committee has improved the experiences of our jurors and enhanced our jury trial process. He is cheerful, positive, and good to work with. Judge Sánchez is open to new and innovative ideas. I feel confident about the future of this great Court as he takes over as the Chief Judge.

Judge Sánchez’s colleague, Judge Paul S. Diamond of the Eastern District of Pennsylvania concurred. “Juan Sánchez will be a magnificent Chief Judge. His great intelligence, warmth, and devotion to this Court will benefit everyone on the Court and everyone who appears before it.” Magistrate Judge Timothy Rice added, “Chief Judge Sánchez is a model jurist committed to equal justice, fairness, and legal excellence. His tireless work ethic and compassion were forged during his journey from the South Bronx to the Ivy League and the bench. His story is truly an American Dream.”

Judge Sánchez was born in Vega Baja, Puerto Rico and moved to the Bronx, New York City at age 12. He graduated from the City College of the City University of New York and the University of Pennsylvania Law School. Judge Sánchez began his legal career as a recipient of the distinguished Reginald Heber Smith Community Lawyer Fellowship, through which he worked as a staff attorney with Legal Aid of Chester County, then spent fourteen years with the Chester County Public Defender’s Office.

Judge Sánchez served six years as a judge on the Court of Common Pleas of Chester County, Pennsylvania, where he presided over criminal, civil, and juvenile matters before his appointment to the federal bench in 2004. In 2016, Chief Justice John G. Roberts, Jr. appointed Judge Sánchez to serve as a member of the Judicial Conference of the United States’ Committee on Defender Services. In addition to hearing cases in the Eastern District of Pennsylvania, Judge Sánchez has regularly handled civil and criminal cases in the District of the Virgin Islands.

In 2003, Judge Sánchez was appointed by the President of the Pennsylvania Conference of State Trial Judges, the Honorable Paula Francisco Ott, to co-chair a special project committee to develop a curriculum on the importance of an independent judiciary. Judge Ott, now a Judge of the Pennsylvania Superior Court stated,

I can attest to his love of the law and commitment to promoting public confidence in and understanding of the judicial system. While we were colleagues on the Chester County bench, he started a successful business litigation mediation/arbitration program. He also volunteered to present the “Meet the Judges” program, a biannual event, and with his usual boundless energy, arranged for school students from all over the county to be brought to the courthouse. This was the largest turnout we had ever had, and he was recognized statewide for that program by the PA Trial Judges Association. I have no doubt that his work ethic, ability to spearhead innovative programs, enthusiasm, and collegiality will serve him well in his new position. To his colleagues on the Eastern District, I say “Hold on to your hats!”

I have known Judge Sanchez since the 1980s, when we were young attorneys in the District Attorney’s and Public Defender’s offices. As his courtroom adversary, I witnessed his consummate knowledge of the law and his commitment to excellence. But I was most impressed with his genuine understanding of the human spirit and how he remained kind and respectful, no matter how tough the courtroom fight might be. When we served together as judges on the Court of Common Pleas of Chester County, I came to know him, not only as a model of judicial excellence, but also as a team player. His enthusiasm for reviewing protocols and procedures in an effort to improve the court system was impressive. He lit a spark for the rest of us to join him in going above and beyond the standards in serving the people of Chester County. I offer my heartfelt congratulations to Judge Sanchez on accepting the honor of serving as Chief Judge of the Eastern District and wish him continued success.

Chief Judge Stengel has left a great legacy for our Court to build upon in the next decade. His example as a jurist, leader, and most importantly, as a colleague and close personal friend will shine a light on the path I follow. He has contributed greatly, served honorably, and served with distinction. Chief Judge Stengel led our Court through a challenging transition period, which included the retirement of one Clerk of Court and the selection of our outstanding new Clerk of Court, Kate Barkman. Under Chief Judge Stengel’s leadership, our Court has enhanced the utilization of our Pro Se/Death Penalty program, taken initial steps toward modernizing the Clerk of Court’s Office workspace, and embarked on a new path toward a more inclusive vision of how we govern ourselves. These concrete achievements are giant steps toward improving our standing and leadership role in the Judiciary.

The Eastern District of Pennsylvania is headquartered at the James A. Byrne Courthouse in Philadelphia and has three divisional courthouses in Allentown, Reading, and Easton with a courthouse staff of over two-hundred employees. The Chief Judge oversees the administration of the district which includes the offices of the Clerk of Court, Probation, Pre-Trial Services, and Bankruptcy. The district has twenty-two active judgeships, eleven senior judges, as well as five bankruptcy judges, and eleven magistrate judges.