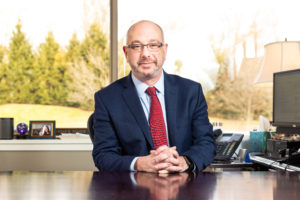 March 4, 2019, Doylestown, PA—The Bucks County Democratic Committee has overwhelmingly endorsed Jordan Yeager for Judge of the Court of Common Pleas of Bucks County. The Committee, which is the authorized body of the Democratic Party in Bucks County, held its endorsement meeting Saturday at Klinger Middle School in Upper Southampton, PA.
Over 91 percent of Committee members voted for Yeager on the first ballot, with 328 out of 359 members present voting for Yeager. Yeager far exceeded the 60 percent threshold for receiving the Committee’s endorsement and was the only candidate endorsed on the first ballot. The endorsement means that Democratic Committee people throughout the County will be working hard to help Jordan win in the May 21st primary election and the November general election.

“I am deeply honored to be endorsed by the Bucks County Democratic Committee. The vote shows that the Committee recognizes my experience and my lifelong dedication to fighting for fairness and justice for all,” said Yeager.

Ensuring equal rights and justice for all is a main pillar of Yeager’s campaign and a hallmark of 26 years of experience fighting to protect the Constitution’s guaranteed freedoms. Yeager’s 2013 landmark victory in the Pennsylvania Supreme Court was the first case in history declaring a state law unconstitutional because it violated the environmental rights of Pennsylvanians.